Another mega land sale has been completed in Denton County just west of Celina.

The just-completed purchase is next to the 600-acre Moberly Farms residential community that Centurion American is developing. The Farmers Branch-based developer now has more than 5,000 acres in that area.

“Centurion American is continuing its strong market positioning by its ongoing acquisition of single-family land,” said real estate broker Rex Glendenning, who handled the transaction. “The FM 1385 corridor has  experienced phenomenal growth over the last several years, primarily due to the ability to deliver more affordable home prices, mainly below $400,000.

“This area from U.S. 380 North to Moberly Road now has thousands of single family lots planned or under development.”

Last month, Centurion American bought 3,200 acres on the northwest side of Celina for a community planned to include 7,000 homes. The sprawling residential development, which will be called Legacy Hills, will have about 4 miles of frontage on the path of the Dallas North Tollway extension.

The latest land sale near Celina is one of a series of large property purchases Glendenning’s Rex Real Estate has recently handled for Centurion American Development.

The developer also recently acquired more than 1,100 acres in Kaufman County near Terrell for a 4,000-home residential project.

The land buys are part of more than $500 million in property deals Centurion American is on track to close this year, CEO Mehrdad Moayedi said in a recent interview.

“We’ll have three more big purchases done by October and November,” Moayedi said. “We have big tracts up north and east closing soon.” 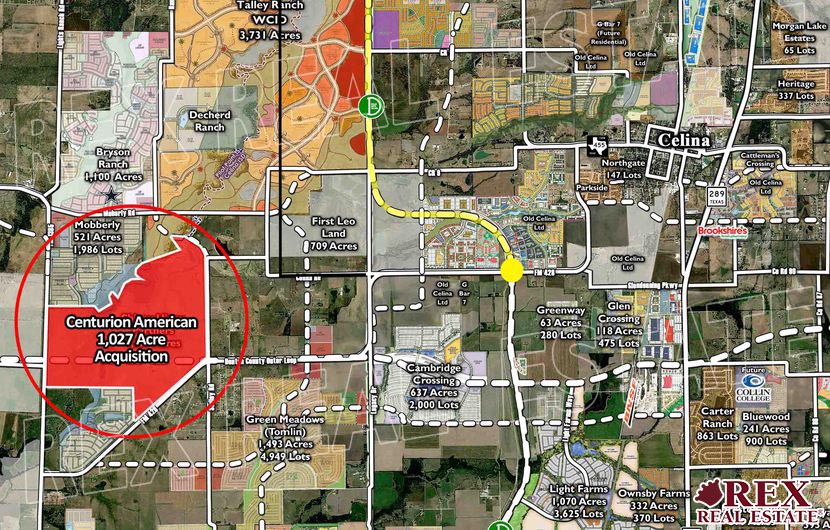